HOW TO BECOME AN ANDROID DEVELOPER

The mobile apps we use every day have changed the way we conduct business, the way we communicate and consume entertainment, the way we learn things about the world.

You wouldn’t be wrong if you thought mobile app development sounded like one of the coolest job industries of the moment.

We’re going to tackle the prospect of becoming an Android developer specifically.

Here’s the bare bones version: you pick a platform—like Android, iOS, or Windows Mobile—learn the technical skills, bone up on your soft skills, and have at it.

To become a successful Android developer, you need to develop several skills and apply them at the right place and time to provide the best experience to your users.

Mobile devices have smaller screens, simpler processors, and – in the case of Android – many different manufacturers, meaning that developers need to keep code flexible and account for a variety of user scenarios.

There are various Android tutorials available online to help you become a better developer.

Hone your skills with the right training and industry exposure.As per statistics, Android apps rule the roost with more than 80% market share.

So what does it take to become an Android developer? Let’s jot down some skills.

Programming languages, like regular languages, are different ways to communicate to a computer how you want it to act.

Programming languages allow us to instruct a computer step-by-step how to manipulate data, collect input from users, and display things on a screen, among other things.

Not to get ahead of ourselves, but Java is a statically-typed, object-oriented language.Pieces of data are stored as variables, which are basically containers that hold data.

Statically-typed languages like Java require us to declare what type of data each variable (or container) will hold.An object-oriented language is one that is built around the concept of objects.

In the physical world, take a look around the room and think of each thing as an object.

Developers have to be much more thoughtful with their code, defining the types of data their applications plan to work with, and more carefully allocating scarce memory resources.

The Android SDK includes many standard Java libraries (data structure libraries, math libraries, graphics libraries, networking libraries and everything else you could want) as well as special Android libraries that will help you develop awesome Android applications.

No one ever talks about XML, and this can lead to confusion when you open up a new project for the first time and notice that there are actually two different main files and two different types of script.

XML stands for Extensible Markup Language, which gives us a clue to what it does.

XML is used anywhere that can benefit from adding context to data.

It is used across the web to make search smarter and simplify data exchange.

XML is actually based on the Standard Generalized Markup Language (SGML), which has been used by the publishing industry for decades.XML files can also help store strings.

Using the Design view is easier for beginners, though it can lead to complications.

For one, you will run into the limitations of XML early on when the designer refuses to let you drop items into specific places.

Without the knowledge of why, this can make designing your app an exercise in frustration!

In reality, XML is actually supremely simple and follows only a few set rules.

Fortunately, you can find a lot of this information online, or simply use the design view to experiment and see how the code should look. 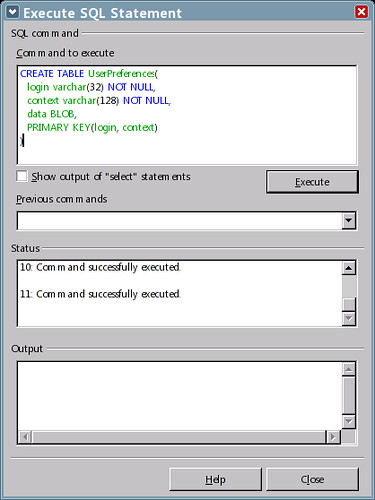 “OpenOffice Base and Apache Derby” by kenjoey is licensed under CC BY 2.0

SQL is not a full programming language in the same sense as Java.

It’s closer to something like HTML or perhaps the logic of a spreadsheet.

It’s mainly used for putting data into a table and then extracting that data based on different filters.

This is basically a declarative language used for storing and retrieving data in a database.

One of the main principles of SQL databases is the schema: a formal declaration of how the database is organized.

The schema is reflected in the SQL statements that you use to create your database.

You may find it helpful to create a companion class, known as a contract class, which explicitly specifies the layout of your schema in a systematic and self-documenting way.

While there are many different programming languages and a host of IDEs (Integrated Development Environments) you can use to create an app, the SDK is a constant.

The Android SDK can be broken down into several components. These include:

Many of the tools included in the SDK involve testing, debugging and packaging apps for Android.

They provide a kind of bridge between Android Studio and a physical device or emulator so that your app can be appropriately packaged and then tested as you develop.

In any case, you’ll need to show the chosen IDE where the SDK is located, usually by pasting the path somewhere.

You can also find the location of the Android SDK in Android Studio, in case you should ever need to move it, or just for your own reference.

Just go to File — Project Structure. You’ll also find the location of the JDK and the Android NDK.

Not only you need to sharpen your coding prowess, but also have to balance equally your interpersonal skills.

As you start to think about attracting job opportunities, and selling yourself as a viable candidate, consider showcasing your Android work on LinkedIn, Xing, through an online personal portfolio, or on sites like Behance and GitHub.

Rub elbows, in person and virtually, with other Android developers and hiring managers or recruiters through meetups, conferences such as droidcon, and digital networking hubs like LinkedIn groups, Twitter chats, and Quora feeds.

You never know what you’ll learn, or who you’ll meet.

To make your app visible in Google search you can use Firebase App Indexing API.

You can use cloud storage and cloud firestore to store data in your server.

If you need to automatically run backend code in response to events triggered by Firebase features and HTTPS requests, use Cloud Functions.

You might want to take a look at other Firebase features such as Firebase Invites, Firebase Performance Monitoring and Firebase Remote Config.

To conclude, after completion of full-fledged android app development training, there are many companies, especially start-ups that offer really handsome packages to Android developers.

As the world moves ever more into the mobile landscape, Android app developers can be sure to find an audience for their creations, or bring great value to companies in need of mobile app development skills.

All good developers, mobile or otherwise, are committed to lifelong learning.

Especially in the rapidly developing landscape of mobile apps: with the advent of wearables, TV apps, auto apps, and more, mobile developers must keep their eyes and ears open to new technology and changing best practices.

No matter how advanced you get, don’t stop investigating, exploring, playing around, and asking questions.

If you are looking for Developer job, click out the link below

Sr Software Engineer (Remote may be)

Click on the links below to learn courses on android development